Location: Toronto
Source: vmsd
Made by: Shikatani Lacroix Design
Published in: September 01 2015 / Other Stores
The Toronto Blue Jays market themselves as â€œCanadaâ€™s teamâ€ â€“ the only major league baseball team north of the border since the Montreal Expos were relocated to Washington, D.C., after the 2004 season.

With the country to themselves, they see their market stretching 3600 miles â€“ from Nova Scotia, protruding into the Atlantic Ocean, to the thriving Pacific Ocean ports of British Columbia.

Itâ€™s a potential fan base of 35 million. And while Canada has always been a hockey-first country, it has become tied to the Blue Jays through the coast-to-coast Sportsnet broadcasting of Rogers Communications Inc. (Toronto), which has owned the Blue Jays since 2000.

â€œWe now reach into every remote living room in the country,â€ says Anthony Partipilo, the Blue Jaysâ€™ vp, marketing and merchandising. â€œAnd as Canadians pour into the tourist center of Toronto from every province, all throughout the year, we feel itâ€™s important that Blue Jays fans have a place to come and celebrate the team.â€ 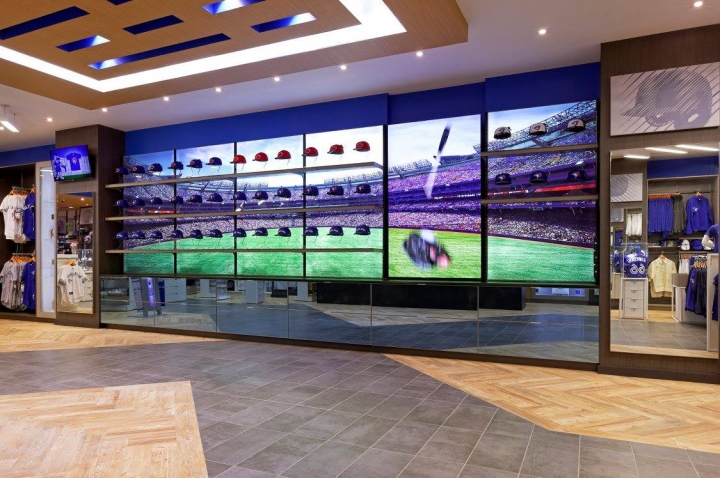 That place is the new Blue Jays store in the Toronto Eaton Centre in downtown Toronto, the cityâ€™s high-traffic mall on the hub of its busiest subway-line stop.

A place for fans to immerse themselves in the 38-year history of the franchise (which includes two World Series championships and several Hall-of-Fame players), they can check game schedules, buy tickets and acquire a wide range of custom merchandise â€“ hats, jerseys, books, collectibles, and even furniture, all with the team logo â€“ not available anywhere else.

Though the potential market is every Canadian, says Partipilo, the design challenge was to appeal specifically to younger fans and women. In fact, Partipilo says the teamâ€™s research shows that women make up 46 percent of the entire fan base, while 51 percent of female fans are between the ages of 18 and 24.

When you consider the steady increase of the teamâ€™s younger fanbase (ages 18 to 30), and that 37 percent of the teamâ€™s weekend game attendance is families with children, the franchise knew it had to integrate social media into the store â€“ a platform with which this demographic regularly engages. The tricky part was keeping it sophisticated.

â€œWe didnâ€™t want to just slap a layer of digital media onto the store and show ads and promo messages,â€ says Richard Dirstein, evp, creative and innovation, of the Toronto-based design firm, Shikatani Lacroix. â€œDigital [media] is integrated into the store in meaningful ways. The content is dynamic and the placement is strategic.â€

The shopper journey begins at the angled storefront entrance. One window is a graphic of the new, retro-inspired Blue Jays logo, embossed with a red maple leaf. The other window features cutouts of letters and numbers, with a textured video behind it containing related visuals: baseballs, fans screaming or, during the holiday season, falling snowflakes.

â€œIt creates a disruption that makes people stop and become interested,â€ Dirstein says. â€œItâ€™s more than just hanging a monitor on the wall.â€

Dirstein likens the effect of people entering through the angled doorway to fans coming up through the tunnel and getting their first views of the baseball field. What they see is a bright, colorful, themed environment totally devoted to Blue Jays baseball.

â€œThe premise was to bring the experience of the ballpark to the store in as many ways as we could,â€ Partipilo says. â€œWe wanted them to feel as if they were entering the park â€“ a happy place.â€

The highlight is the five-panel hat wall. Four of the panels are backlit graphics of the teamâ€™s playing field. The fifth panel is dynamic and live, featuring cycling video or images of players, past and present, and other aspects of the teamâ€™s history.

As the content changes, it requires customers to stop, linger and watch. â€œAnd isnâ€™t that one of the basic objectives?â€ asks Dirstein. â€œThatâ€™s Retail 101.â€ 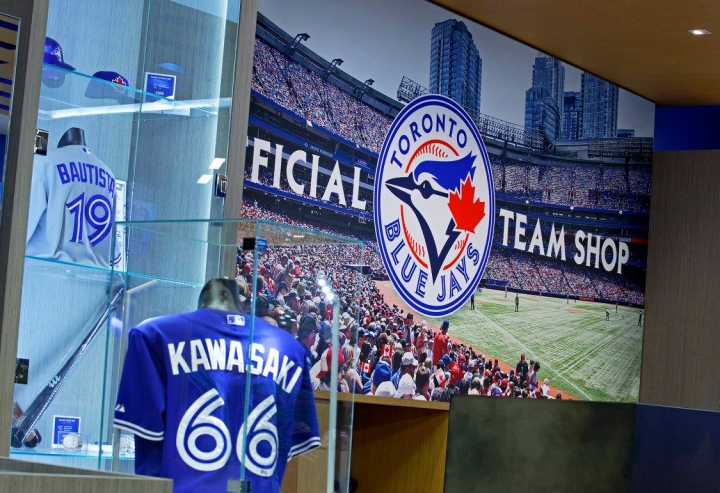 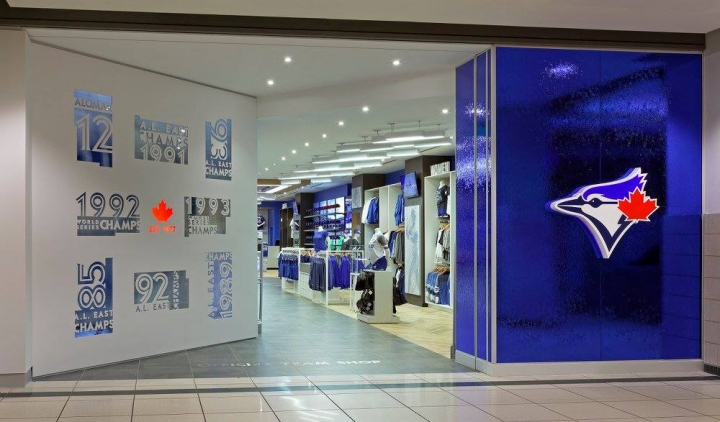 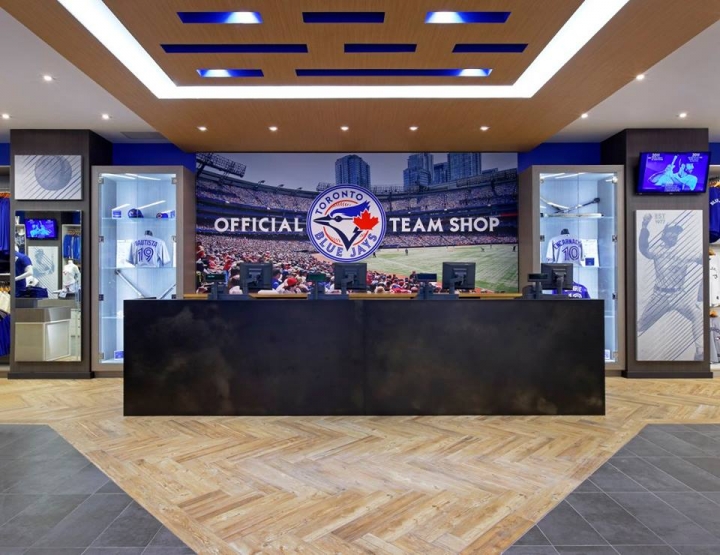 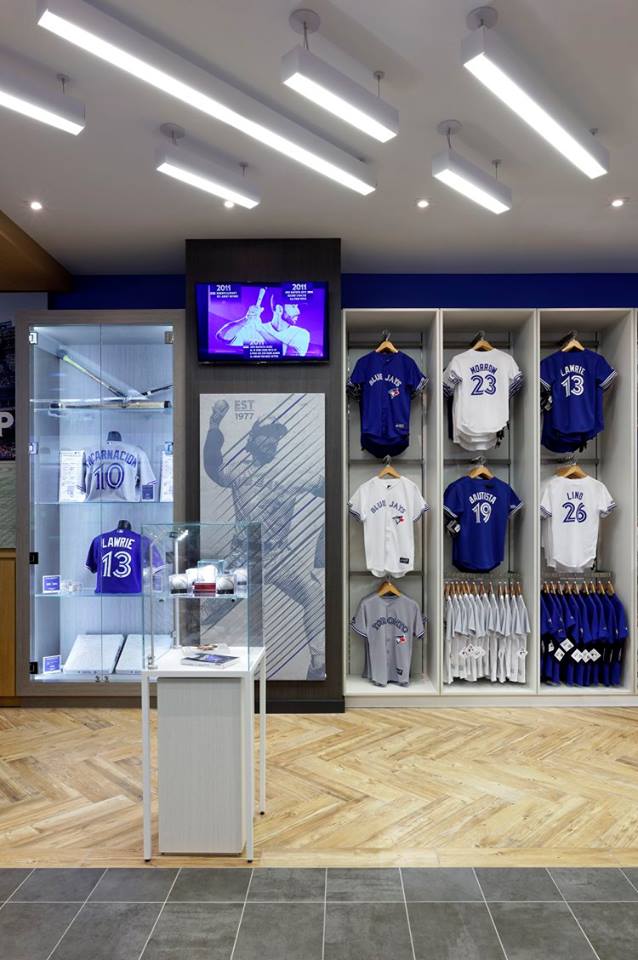 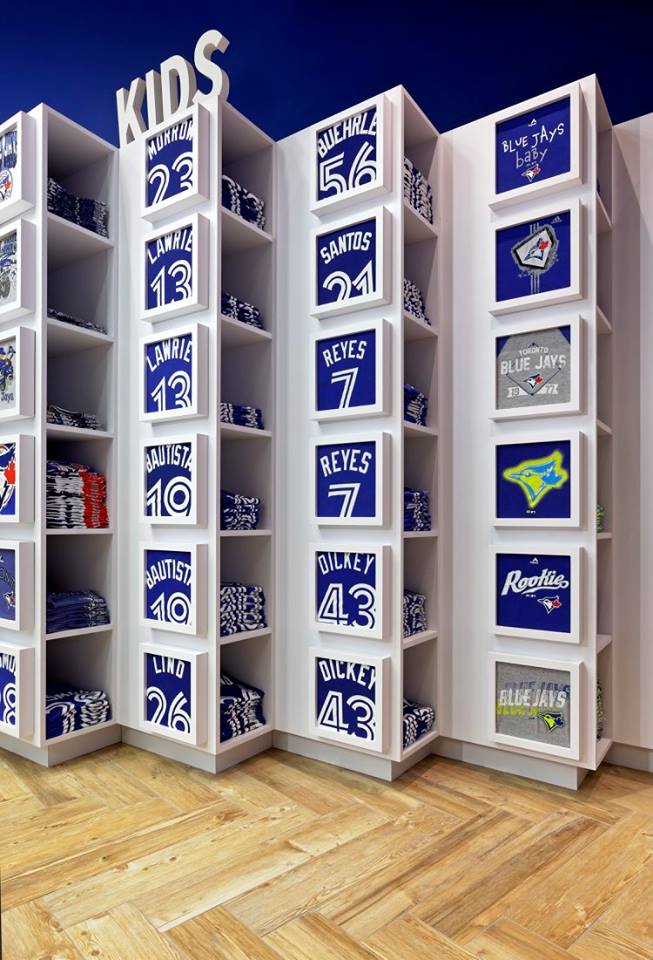