Location: Milano
Source: vmsd
Made by: Paolo Cermasi & Associates
Published in: December 31 2012 / Shoes / Bags
Geox makes its biggest brand statement ever with a Milan flagship that mirrors the products it sells.

Geox, the Italian shoe and garment brand, has a 25-year history developing merchandise that â€œbreathes.â€ The practice sprang from founder Mario Moretti Polegatoâ€™s discovery, during a trek through the desert outside Reno, that punching a few holes in the soles of his shoes gave his overheated feet some much-needed air. Later, back at the familyâ€™s footwear company, he patented a system to create the first â€œbreathable shoe.â€

So what better way to showcase the brand than inside a building thatâ€™s been designed to breathe, itself? â€œGeox had been looking for a long time for a well-located flagship in Milan, able to represent the brand and convey Geoxâ€™s values,â€ says Polegato, Geoxâ€™s president. â€œAs soon as I heard about this architectural project I immediately understood the natural connection with Geox and I didnâ€™t hesitate in supporting it.â€

Called the â€œBreathing Building,â€ the top five floors of this seven-story structure are covered in 734 gold, copper and bronze-colored steel plates that can be raised or lowered via 82 computerized motors. Taken as a whole, the plates function as a second skin for the building, increasing its ability to permit natural ventilation and lowering energy consumption by cutting down on the use of air conditioning. The plates are peppered with micro-holes to allow visibility from within. Geox occupies the ground and first two floors, while the remaining four floors house non-retail tenants. While the buildingâ€™s external steel membrane reflects Geoxâ€™s technology â€“ many of its products use a membrane inserted into the garment or shoe to allow for increased ventilation â€“ it also represents the latest evolution of the brand, as it moves from performance-based, shoe retailing to becoming a lifestyle fashion offer.

Emblematic of that change, the 10,760-square-foot store on the via Torino is the largest Geox store to date (most stores average 2000 to 3000 square feet) and focuses more on lifestyle displays and visual merchandising, rather than commodity presentation.

â€œAs an Italian brand, Geox features a typical Italian flair and design that guarantees customers a glamorous image,â€ says Polegato. â€œThis is reflected within our mono-brand stores, where materials such as wood and Plexiglas have been used to emphasize the concepts of nature/well-being and transparency.â€

These same materials have been employed in the Milan store, but in new ways. For example, the glass-fronted translucent cashwrap has a white top that complements the storeâ€™s generally white interior. â€œIt was also conceived as a see-through display and is used to showcase a selection of shoe styles,â€ Polegato says.

The new format also calls for more tables and shelves to provide greater visibility of the merchandise and multiple freestanding walls give a more domestic scale to the interior. A 29-foot-tall LED screen on the back wall near the broad staircase puts the Geox name in ever-changing lights.

The graphics dotting the perimeter of each floor are also noteworthy. Geox spokeswoman Alessandra Guerra says that the carefully styled posters with smiling models are intended to promote a Geox worldview, rather than emphasize product performance.

Geox is a brand thatâ€™s on the move with more than 1000 stores across the globe. Future flagships are planned for Madrid and Barcelona later this year and will incorporate design and fixturing elements from the Milan location, but not the same striking exterior. For now, the citizens of Milan can breathe a sigh of satisfaction knowing that they have the most up-to-the-minute Geox store anywhere in the world. 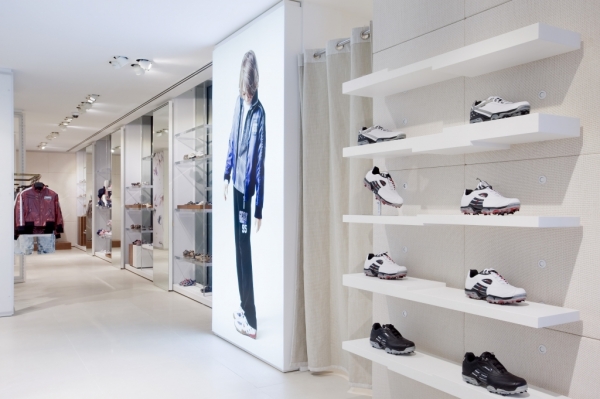 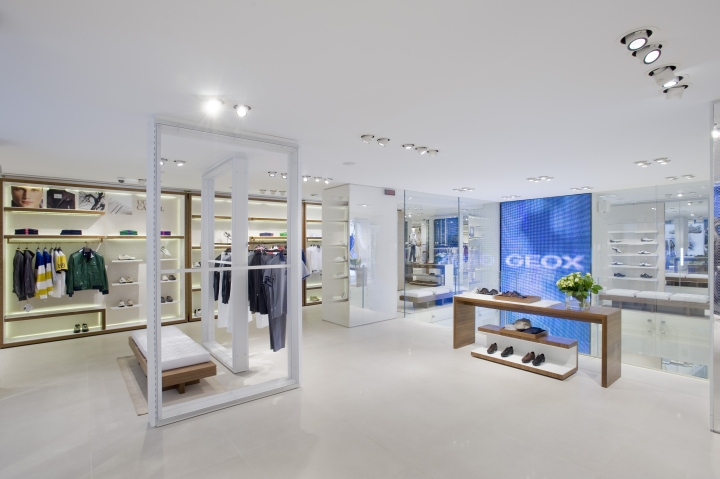